The most significant thing about Raymond is that he is unlike other personalities in the story. He is not a completely "full" alternate personality in the same way that Bob, Marla and Tyler are. But he also is not the type of personality that has zero identifiable characteristics like the members of Project Mayhem. He's somewhere in between, and that is important.

Raymond is basically on his way to becoming a real, "full" alternate personality in the same way Bob, Marla and Tyler are - which is why he is a threat Tyler wants to deal with preemptively. As far as we know, Raymond is never actually shot by Tyler, but he is literally ran off by Tyler with the threat of being shot in the back of the head, unless he pursues his actual career of practicing animal medicine.

Raymond Has a Full Name...Almost

Apart from Bob, Marla and Tyler, Raymond is the only other personality that has a full name in the film. But there is a case to be made that his name is only partially complete, as we do not know his middle name. Since we only know the middle initial, we can only guess what his middle name is and since that is deliberately left out, this subtly suggests he is still just a partial or semi-complete identity and also not a fully intact personality like the other 3 main personalities.

But how would he know specifically that it was a small, cramped apartment? The answer is simple: Raymond does not exist, and is just another alternate personality that Tyler is trying to control and destroy.

Tyler knows the details of where Raymond lives because he knows where the other alternate personalities live: the Paper Street house basement. 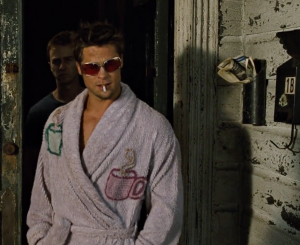 We know the Project Mayhem members live in the basement after Jack goes down to talk to Tyler and discovers the make shift bunk beds Tyler had been noisily constructing while he was talking to Marla in the kitchen. If Raymond had been a personality of Jack's that had been developing inside Jack's psyche, up until this point it is logical to assume Raymond had just been an anonymous member of Project Mayhem, or an equivalent, who would have resided in the same basement apartment.

In addition, when Tyler and Jack are screening the potential Project Mayhem members on the front porch as part of their initiation, we see the address of the Paper Street house, which interestingly has a letter in the apartment unit - 1B. What is particularly confusing about this is the fact the house has any letters on it at all, as it is not an apartment complex or unit, and is simply a house. This further adds credence to the theory that the Paper Street house does not actually exist as Jack imagines it and that it is rather an apartment or hotel room in reality.

When Tyler asks Raymond what he studied at community college before dropping out to work at the convenience store, Raymond says "S-s-stuff." then "Biology, mostly." When pressed for more information Raymond eventually confesses: he was going to college to become a veterinarian.

Why was Raymond so hesitant to tell Tyler this? Sure, he's got a gun to his head - but why does him finally saying "Veterinarian! veterinarian!" sound like such a confession to Tyler? Why does it feel so much like an interrogation?

Why does Raymond act cagey by answering merely…"Biology, mostly" and "s-s-stuff." If you've been following up until now you know there is clearly some type of symbolic connection between animals and characters in the movie.

Just to recap on the persistent animal references: Bob (Robert Paulson) is the "big moosey", Marla Singer is a cat with a "hair ball" instead of a death rattle and we see on the Lincoln town car there is a bumper sticker stating "Recycle your pets" and the bus that delivers Jack to the Paper Street house dons a lighting company's advertisement saying to "Illuminate your pets." which is likely a reference to Jack walking inside the fully illuminated Paper Street house in this same scene that advertisement appears.

So why is Raymond a threat? Why is he being interrogated and terrorized? Because he wants to be a veterinarian. Veterinarians help animals, and more specifically - pets. This is completely at odds with Tyler's motives - which is to remain Jack's primary alternate personality and to take over Jack completely.

Raymond essentially represents a rogue personality that has developed past the stage of a mindless, controllable Project Mayhem drone into an alternate personality so real to Jack that he has a backstory (community college), a part time job (convenience store worker) and an almost full name (which no one else has, except his other primary "complete" alternate personalities).

Tyler knows he doesn't need to kill Raymond, so he does the next best thing and terrorizes him into running away, but to Jack this is all the same. Raymond will never return, and he is effectively dead to Jack. Bob wasn't so lucky.

Tyler takes Raymond's license under the guise of being able to keep tabs on him - in order to make sure he continues with his schooling. But is this really why Tyler takes his license? And why does he refer to this "exercise" as a "human sacrifice"?

Toward the end of the film when Jack is in Tyler's room searching for information on where Tyler might have disappeared to, we see a shot of the backside of his bedroom door as it closes, with all of the licenses he has taken from, presumably, other people just like Raymond K. Hessel hanging on the door.

Referring to them as "human sacrifices" also helps further the illusion for Jack that these are in fact real people - and not just equally imaginary personalities like Tyler.